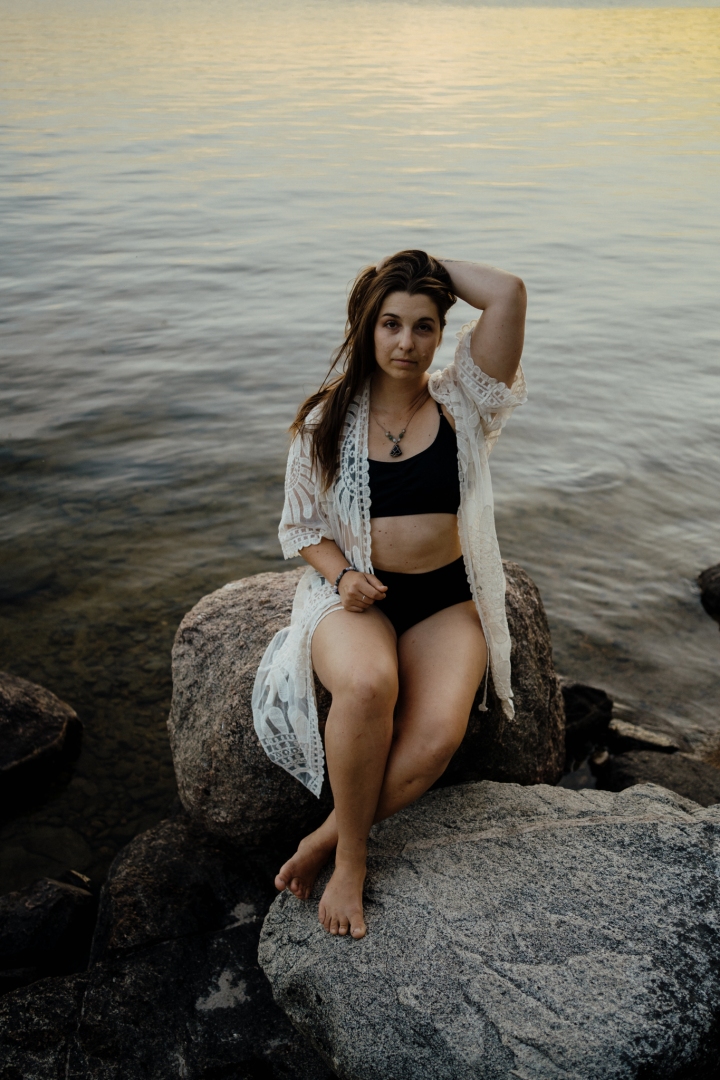 I am no longer willing to sacrifice my health in order to conform to the expectations of capitalism.

But it has taken me a lot of struggle, introspection, support and confidence to get to this point.

Last summer, while in Kenora, after having asked for a temporary reduction of my weekly hours at work from 40 to 32, I finally started to really accept that 40 hours of work per week was just not something that I had the capacity for. I mean, sure, I could do it. But working 40 hours per week meant sacrificing my physical, psychological, emotional and spiritual health.

I will be honest, it feels dramatic saying that. I can already feel people rolling their eyes, tutting at this. There is even a part of me that feels that way too – how immensely privileged and self-indulgent of you, Michèle, to decide that you just don’t want to work full time hours. What, as if you are somehow better than others? That you deserve to work less?

Ugh, that was the internal dialogue that dominated my consciousness for a few weeks as I contemplated requesting a permanent reduction of my hours to part time (i.e. 32 hours per week). I went back and forth, different parts of me arguing about what I really needed and what was really best for me. A part of me was crying out “Enough!! We can’t do this to ourself anymore. It’s not worth it. There is so much more to life”. But those other parts, harsh but ultimately protective parts, filled me with self doubt and shame.

I talked about it a lot with my mom, my roommate and a close friend. All were in support of me doing what I needed to do to be well. So why was I still inwardly struggling to make the request for what I clearly needed?

After listening to that podcast, I knew in my heart that I needed to advocate for myself, feeling a sense of responsibility for all the others who may not have the resources, support, financial flexibility and know-how to advocate for themselves. Maybe that’s pompous of me to think that way, but making meaning and connecting to the larger society really helps me find resilience in moments of hardship. The next few days, as I made the official request to my co-workers, managers and family doctor, I felt so much internal resistance and self-doubt. But I kept reminding myself that, in some ways, I was forging a path not only for myself, but for others as well who may eventually find themselves in need of making these types of requests for their health.

The process actually went quite smoothly. I first expressed my needs to my physician colleague who graciously listened and supported my plans, even offering to submit a letter to my employer in support. Then came the conversation with my managers, which went well but was very difficult for me.

I really struggle to let myself be seen as “not okay”. It’s interesting, because I can blog and talk about it very openly after the fact. But in those moments, when I am feeling emotional and too needy, shame takes over as well as those very mean internal stories of “something is seriously wrong with me”.

So I cried. No, uhm, I like ugly cried when talking to my manager. Ugh, it felt so so embarrassing. There are parts of me that try so desperately to hide away my “needy” side, believing that that emotional part of me is disgusting and unlovable. I felt that part come into play, making me feel embarrassed and even ashamed. But I held strong, expressed my needs to my manager despite the mix of sadness and shame that filled me. I even managed to pause a bit, catch my breath and express that I was feeling ashamed. Again, I was met with support and grace.

My employer went right to work to sort out our options for accommodating my needs. Ultimately, we had 2 options: if I could obtain a medical document attesting that I had a disability, then it would be quick and easy as my employer had a legal obligation to accommodate me. If my family doctor did not agree that I had a disability, then my employer still planned to accommodate me, but it would mean a bit more work and maybe even communication with the ministry of health regarding funding.

So on to the next step – the conversation with my family doctor. She has been my mom’s doctor since before my brother’s birth. So she has literally known me since the moment of my own conception. And she is one of the really good ones – she listens, she cares, and she supports.

Yet, I was still very apprehensive about having this conversation with her. In the past, going to the doctor’s office often felt difficult. Despite her listening and caring, I often felt like my concerns were brushed under the rug, minimized to insignificant symptoms. I also often felt like a failure when I would break down in tears (which happened often). This was usually followed by a suggestion for a prescription for antidepressants.

So yeah, I was nervous. I needed something from her and I wasn’t sure she would give it to me. In preparation for the appointment, I thought about points and arguments I would make to convince her of my struggles.

But the call came unexpectedly, and caught me off guard. I had emailed the required documents to the receptionist 2 days ahead of my appointment. My doctor, not realizing we had an upcoming appointment, picked up the phone and called me on a Monday afternoon. I had a half day at work that day, and so I was out kayaking, in the middle of Lake of the Woods when the call came through.

To my surprise, I was able to calmly articulate what had been going on with me and how I needed reduced hours at work to have the time and energy to take care of myself. I spoke about my new therapist who was teaching me somatic skills, and how transformative that had been for me. Yes, I was still taking my meds, I reassured her. But still, I just needed the extra time to rest and recover. I also explained my 2 options, and expressed my doubts that she would be able to attest that I had a disability. It felt a bit like the “cheap’ way out of this.

“You do have a disability Michèle!”, she exclaimed, “you have crippling anxiety”. We chatted a bit about how my anxiety meant that I had less capacity than others, and that maybe I would never be someone who could be well while they worked 40 hours per week. I felt very ambivalent about it all. In the end, I got what I needed and she happily completed the forms for me, officially labeling me as “having a disability”.

Following this phone call, I continued to feel pretty confused. I felt a mix of surprise, relief and anger.

Why wasn’t I just happy? I wondered. I got what I wanted … didn’t I? Again, having to claim a disability status sort of felt like the cheap way out. Thoughts of my privilege came up again – who was I to use the system in that way?

But there was anger in there too. Why the fuck should I even have to claim the status of being “disabled” in order to find a work-life balance that meets my needs?? Is something really wrong with me that I can’t (and don’t want to) conform to the “normal” that is expected of us in this capitalist society?

After months of working part time, and now doing contract work that enables me to work less without having to use a medically-validated disability status, I feel entirely comfortable saying I simply have zero interest in working “full-time” hours. I am sure I could, as many others do, but the trade-off would be my health and that’s just not a sacrifice I am willing to make anymore.

Some of that anger still lives inside me though. I feel angry that we, as a society, value productivity and monetary gain over the actual well-being of the members of our society. We focus so much on our functioning, and so little on our very legitimate and incredibly important human experience.

Measuring our well being by our level of function is actually one of my biggest pet peeves. The assumption essentially being that if you can do the things you need to do, you are fine. In the last year, I have tried to talk to my family doctor twice about adhd (which I strongly believeI have) only to feel dismissed. My doctor went on to tell me that she really only prescribes stimulants when patients with adhd really need that boost to help them through moments of increased productivity needs. And I felt unable to advocate for myself, because I didn’t want to be difficult (that part of me that feels ashamed took over again).

Objectively, I’ve had people tell me I seem very successful and happy. I just had a conversation yesterday where I expressed my experience of struggle, and the person told me they perceived me as extremely capable and well off.

I am. It’s both and. I am successful by the measures of our society, I do outwardly express joy and happiness AND I also experience a lot of internal struggle and distress.

It’s hard to get those internal experiences validated – and of course, it’s difficult to measure or objectify them. Again, I think we also live in a society that has focused on and prioritized those very measurable, outwardly things. And, as a whole, has really forgotten about the human experience and it’s importance in both our personal health, amd also the health of our society.

The word health is actually rooted in older european language and originally referred to the concept of wholeness or of being whole. I will argue that our current lifestyles far from meet our needs for wholeness. As Dr. Gabor Maté has argued for many years (and has written about in his upcoming book The Myth of Normal), we live in a society that is inherently traumatic because it forces us to ignore our needs and to disconnect from our core selves.

It’s no surprise to me that the world is feeling so turbulent these last few years. We are just so deeply disconnected from the things that really contribute to our wholeness – ourselves, community, nature, movement, meaning.

It’s definitely hard to blog and talk about this, and to build an unconventional life that seems to be so counter to the norm. It’s hard not to be sucked into this idea that something is just wrong with me, and that that’s why I don’t fit into society so well. It’s also hard to lament these things, when I am fully aware of my privilege and the abundance of wealth in my life. But just like prince Harry (yes, I am finishing this blog post by putting myself in the same realm as royalty), I feel a sense of, not only responsibility, but more importantly purpose. It feels so important that I advocate for a shift in how our society perceives the health and the worth of its members and communities. So that we can move away from this concept of disability as inherently belonging to the individual, and move towards building a society that values and supports us in all of our diversity and gifts.